The rack is tall (88"), and heavy (supposedly ~475lbs, and I believe that). The rack is 3x3 tubing, 11 gauge. It is mostly welded, and once assembled it is very sturdy. My experience with other racks is working out on these power racks: Hammer Strength, Icarian, Star Trac, Weider, Phys-X, and inspecting in stores...the BodyCraft and the Powerline racks. 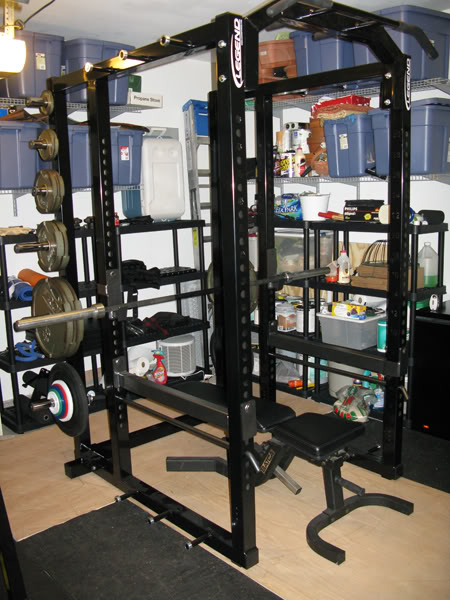 To compare with those, it is in the league with the Icarian and Star Trac in terms of stability and finish. Perhaps the finish on the Star Trac is better, and the stability on the Icarian is better...but as a whole package I think the Legend has better features than either, is plenty good looking, and stable enough I'd think for any high school/college gym setting if not commercial gym.

I got it for the combination of stability, features, and price...and I'm hugely pleased with what I got.

I ordered from Legend by calling the number on their website. I reviewed the prices and features extensively advertised on a few other sites such as muscledriver, rogue, christian's, gtech, and a few others, and the local fitness supplier stores. This is an expensive rack, and although I committed and saved for buying one at this level, a few dollars either way makes a huge difference to me as a consumer. The price/features combination was what actually led me to this rack, with the main other choices being a William's Strength or Force one ordered from EliteFTS or fatbars...I digress.

So, the price shipped from legend was the best by a lot (for me, anyway).

The Legend rep was courteous and responsive, which I didn't really expect them to be to a residential consumer. They also let you pay %50 down and %50 prior to ship, which also makes a big difference for me. Anyway, I made the decision and ordered...

It took a little more than 4 weeks for mine to come. Depending on what you're getting, and how busy they are, I think they said it could vary, and take up to 6-8 weeks...but even at that it would be worth it. The rep said at the time I ordered they were running about 4-6 weeks...so I guess there is just some variation based on what's happening over there.

Shipping is a big cost for this item. Still, if you've priced it out on the various websites, I found that ordering it from legend direct basically covered shipping in terms of the price difference. Someone from Legend called me to setup a time. They didn't make it, though...from what I can tell they didn't plan out the trip correctly and misjudged the distances they were going. However, the appointment was in the evening and I didn't have to interrupt any plans so I let it slide with their apology.

They did show on time the following day. Legend has their own truck and service, which I think is great because the equipment showed up in great condition. There were some minor nicks in the paint, but IMO nothing to get excited about. Overall the condition was great. I think a large part of that is that since they deliver it, they know how to pack it correctly, and when the truck showed up the rack was standing and bolted to the floor, under shrink wrapping.

The truck had a lift gate, which was essential. Offloading it into my garage was no problem, although if your destination is inside a building I would break out your measuring tape and confirm the dimensions very carefully...because it's a heavy piece to try fancy maneuvers.

So, there were no instructions. However, I suppose there are none needed. The packing list showed they gave me the correct hardware, and there are only 8 bolts to be put in, and all the same size...not rocket science.

I put it together solo. A second person would be highly recommended for ease, and for safety. 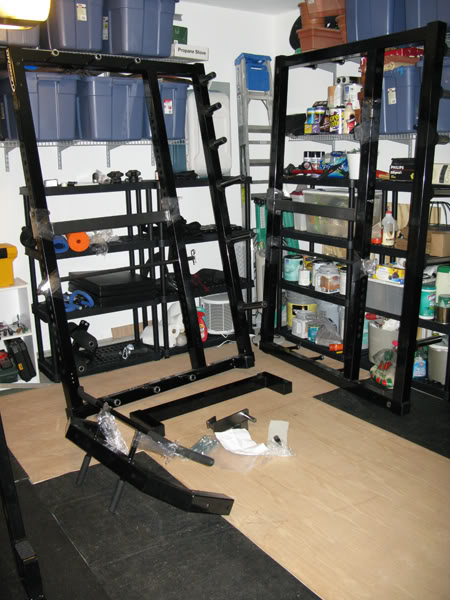 The side pieces stable enough, and heavy enough to stand upright on their own, but they could be tipped over by knocking into them before they're bolted...it was somewhat tricky to get the bottom back piece bolted, and I found using wood shims on the sides helpful to add some stability until everything is together.

I got the upgraded cross member with the fancier pull-up bar, and that was a real pain to get on solo. It would be no problem with another person, but if you're doing it alone you have to be pretty careful because the piece is relatively heavy to hold in an overhead position while trying to bolt it to the welded sides without them tipping...

...but, it can be done. I'd say the assembly is straightforward and would be a piece of cake with two people. It's somewhat difficult alone, but in any case it only took about a half hour to do.

The rack I bought (3133) comes standard with some really nice features. 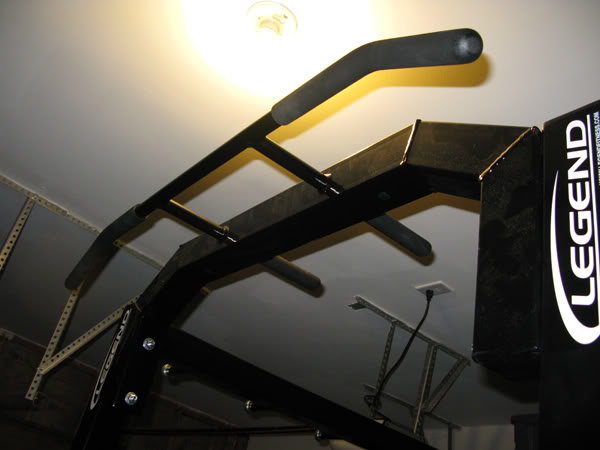 Numbered posts (cut out of the metal), I didn't even know about this until it arrived. 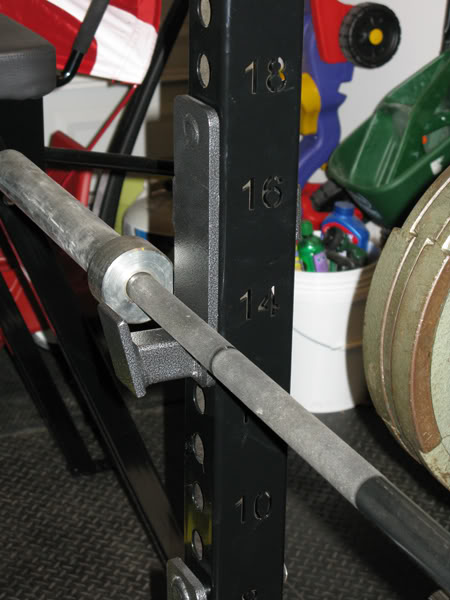 Sabre spotters. Pretty heavy, but I couldn't say if they're solid or not. They are much less 'springy' than the spotter pins on the Star Trac rack I have worked out on. 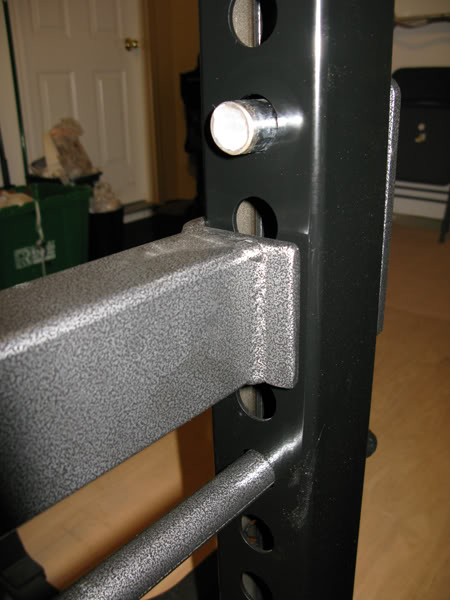 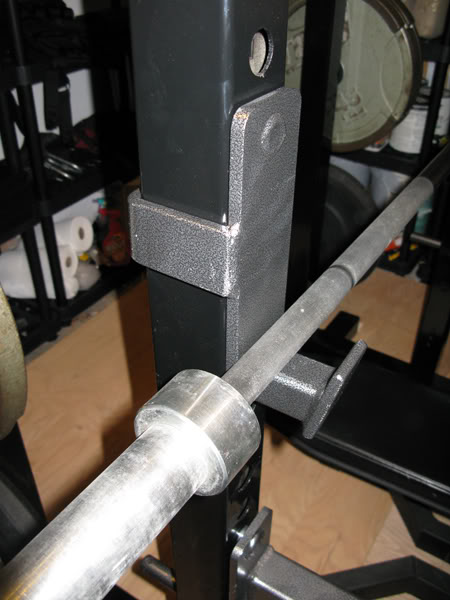 Plenty of room behind the back posts.

Plenty of room inside the rack.

I got a few of the add-ons. Here's what I got and why:

Upgraded cross member. I have a really nice straight pull-up bar, and wanted this for more fun and options. Totally not required but very nice. Welded Bottom and Top band pegs. These aren't much to add on, but it's an important choice because you need to know what you get, and what you give up for choosing this. 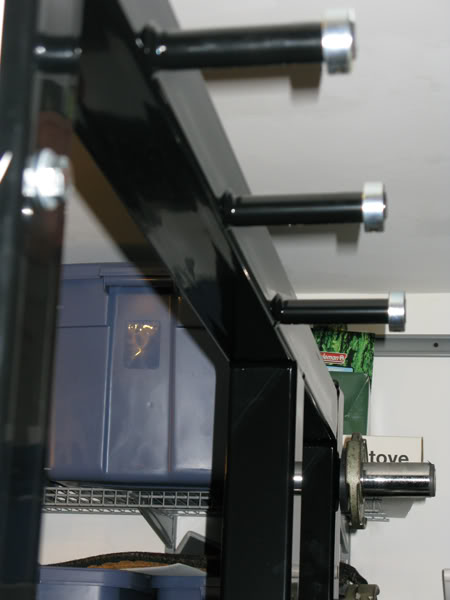 Top pegs: To get these, you give up standing press inside the rack, because your weights will probably hit the upper pegs if you're around 6 ft. You can still probably press with smaller plates, and definitely can do some press exercises using bands inside the rack. You get an easy way of doing band work from the top, which I wanted. And I'm fine with the opportunity cost because I can still do seated press and use the spotter pins, or press outside of the rack. 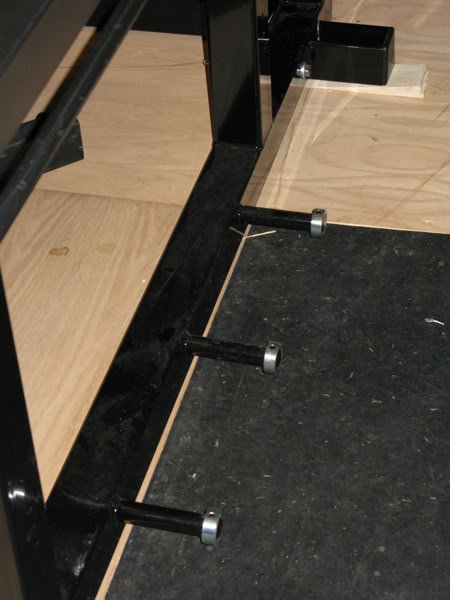 Bottom pegs: To get these, you get an easy way of doing band work from the bottom...but you give up doing deads inside of the rack unless you want to destroy your pegs. Of course, you can still do rack pulls, and, rack pulls with bands. Again, for me it's what I wanted and in any case I already have a dedicated space for doing standing press and deadlifts outside the rack anyway.

Legend offers a spotter pin with the band pegs in them, which you can move around the rack. I didn't get that because I was concerned about not being able to get the appropriate stretch from the typical bands because it would be at a different height. That could be unfounded because you could stretch it out across another peg I suppose, but given my space and situation I'm fine with the welded pegs...

Beefy spotter arms....just because I like that style of changing. I've been fighting with the adjustments on my Phys-X rack for a while and it drove me crazy. It was so hard to adjust it really did become annoying and impacted my workouts to where I didn't want to change the settings. So, when getting a nice rack I wanted nice spotter arms. I'm sure the sabres would be fine alone. But anyway I like having a second pin which I think will make it easier to change between settings during a workout, and also focus on certain range of motion areas if I want.

Add-ons I didn't get:

Swivel pull-up handles. The prostyle crossmember supports them, but I have rings and can just use those for this purpose.

Landmine. I'd like to get this for rows, but cost was a factor and also I wasn't 100% how my space would feel with the new rack and if it'd work out. I may get it later, so asked them to pre-drill the landmine attachment holes.

Dip attachment. I like rings for this, and although I'm sure it's nice I don't foresee getting it.

Step up. I'm not dying to add these to my routine, although again I'm sure it's nice seeing legend's quality on other stuff.

Inverted safety arms. I'd like this, but it just wasn't in my budget. I think it would be a nice tool to have available. I would consider trying out attachments from newyorkbarbells with this rack. Extra j-hooks and safety arms from legend, while really awesome, are also really expensive. A couple hundred bucks for more j-hooks, while it's more like 50 or so from nybb...

It's more than I'll need and I love it. I think it's a step above in quality and features than the more reasonable home gym options of the powertec or bodysolid, or bodycraft even. After examining one in the store for a while, I couldn't honestly say if I had a bodycraft if I would ever want to go to this. However, after going from Icarian and Star Trac...down to the Weider and Phys-X I got from craigslist, I got to where I really appreciated a high quality rack and for myself decided to budget over some time so that I could afford one.

I was able to pay for a lot of this rack by selling off my old investment and winnings (meaning I got them free in deals) in dumbbells, rack, extra plates, etc...but still for the average person you'd need to plan and save for this one.

When I consider how much I have previously valued computers, game systems, music instruments, and so on...it put it in perspective to me. If you play guitar every day you might appreciate it enough to get a Martin, or if you're an avid computer programmer or gamer you may spend your money there. A lot of people might spend it on a TV these days...but we've decided to put some into a home gym to have the one we want, and one which will be quality and last...so, I'm happy with this one.