The homemade weight training equipment design, article and photos by a reader of this website, Jim Hamlin.

Here's a rundown on some of the homemade gear that I've made:

I originally ordered the power hooks after seeing them somewhere. Worked pretty well. Shortly after, I noticed your article about using chains for spotting. I have to agree that it is the biggest pain to try and get weight up for doing things like the shoulder press – I'm able to press more than I can "comfortably" get to the right starting position. But now with the self spotting cables, it works great. 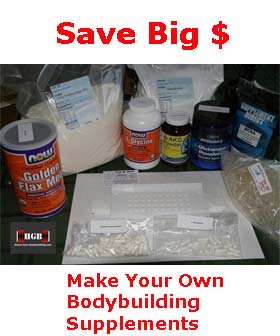 I took your chain idea and thought about a little twist – what about using aircraft cable? Then it would be thinner and ideally less intrusive. I've basically made cables for each of the lengths – shoulder, incline, flat bench, and decline. I've noticed there is some movement at the end with the biner and the power hooks, but I used your seatbelt cover trick and that seems to work perfectly. 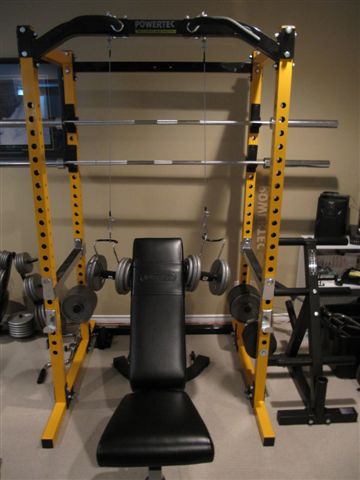 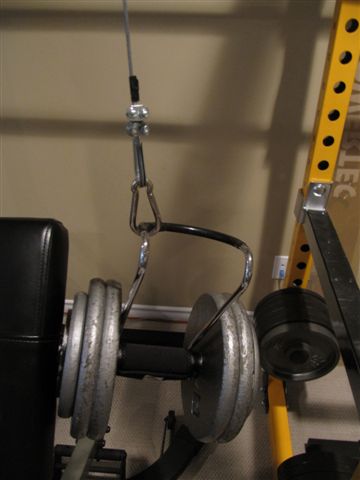 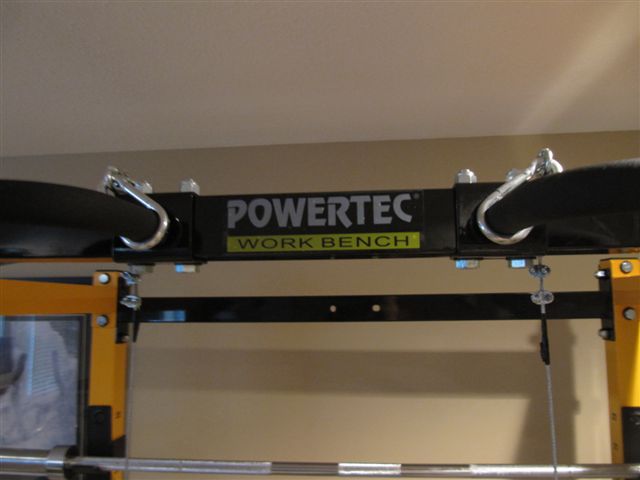 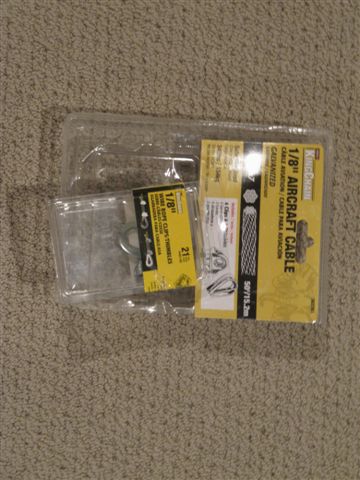 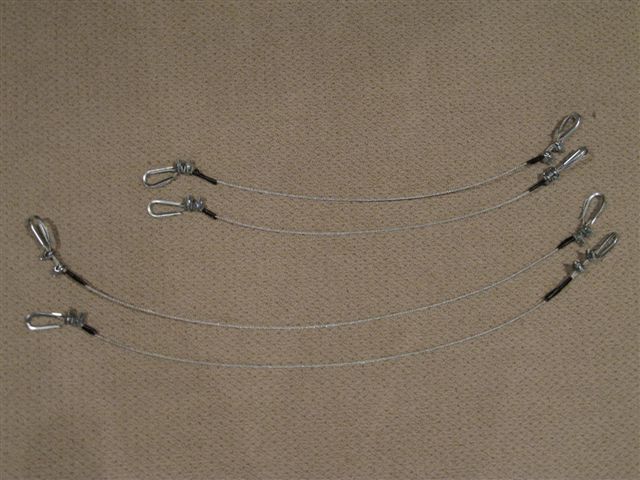 In the past I had always used a couple plates to create a spacer. But that was always a little bit cumbersome. I whipped up a quick extender so I can get a good stretch in the back. Really only took a couple cuts to make. I've thought of adding additional placements for the feet and maybe the stair runner for grip (like on the calf raise) but haven't really found it necessary. Cheaper than buying one! 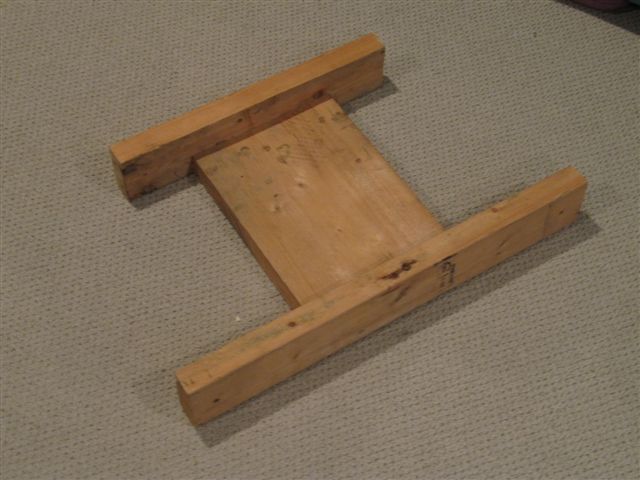 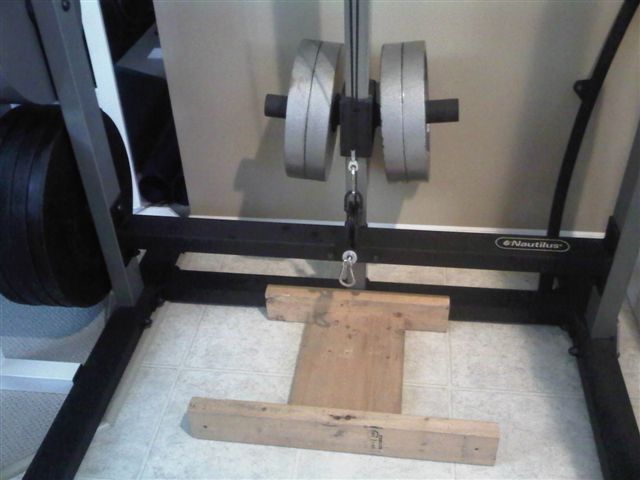 I thought a great alternative to leg presses would be to incorporate step ups while holding some decent weight. I started to look at pylo boxes, but they are too damn expensive. So in looking at some of the stands you have on your site for the belt squat, I figured I'd make one of my own.

It's turned out pretty well and has been useful for all sorts of things including the pulldowns (shorter than my bench so get a better stretch), the step-ups, and also useful for barbell shoulder press and barbell military press in my cage. For the top, I used one of those interlocking floor foam pieces, cut to size. I fixed it to the box using carpet tape – it's worked great. 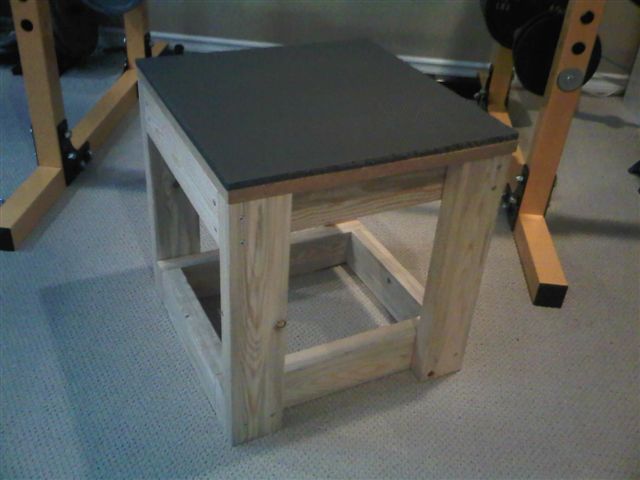 I had a smaller one that I had made but I never really liked it. I tried your design and it works great. Brilliant idea with the stair runner too! 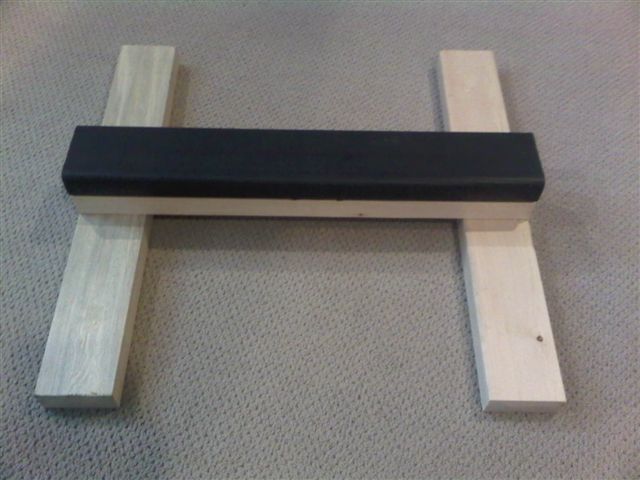 Had some extra weight holders from my Nautilus set that were sitting in the bin collecting dust. Funny, I almost ordered additional plate holders from NYBB until I saw your homemade ones. It gave me the idea to reuse my existing plate holders, but create some adapters so they would fit my Powertec rack. Worked great! It’s also given the added benefit of more "stability" to the rack, especially when using the ab straps. 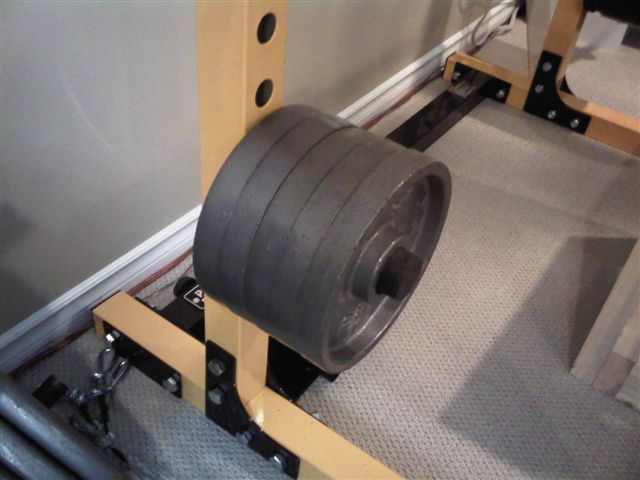 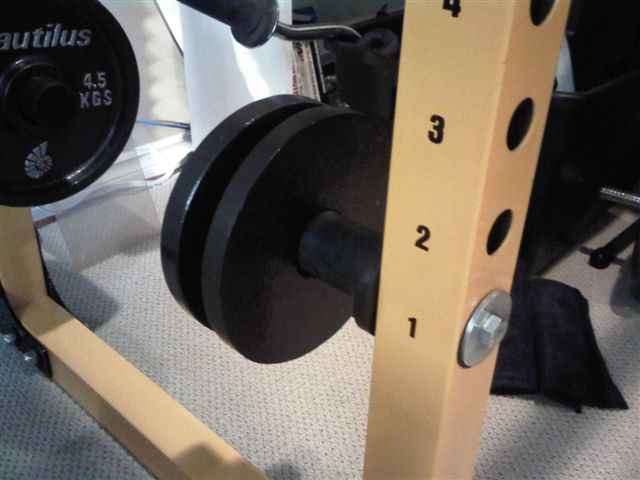 Hope this wasn’t too long of a read... Thanks again for all the ideas!