The modern dietary regimen known as the paleolithic diet (abbreviated paleo diet or paleodiet), also popularly referred to as the caveman diet, Stone Age diet and hunter-gatherer diet, is a nutritional plan based on the presumed ancient diet of wild plants and animals that various hominid species habitually consumed during the Paleolithic era - a period of about 2.5 million years duration that ended around 10,000 years ago with the development of agriculture. Source

To sum up this diet: you only eat what could be hunted and gathered such as meat, fish, nuts, seeds, plants, vegetables, or fruits. Nothing processed or in a box and NO grains!

The theory is that we have only been eating grains for a mere 10,000 years since the beginning of agriculture, but we have a digestive system that was formed over 2 million years ago. We are not genetically programmed to eat grains.

I have been trying to eliminate grains from my diet to see if a certain autoimmune disorder I have clears up, namely psoriasis. I can eat a sandwich without bread, but what I really miss in the morning is cereal.

Try finding a cereal without grain! So I did try and found this: Paleo Crunch. Now it's not a bad price and it gets good reviews but I knew I could make this myself.

I did a google search for "homemade paleo diet food" and found this recipe on a photographer's site.

Here's the recipe with a few modifications:

Not only is this a grain less cereal, it's high in good fat and one of the best cereals I have ever had! It holds its crunch in milk (yeah I know, milk isn't on the paleo diet list...too bad!), it's sweet and extremely crunchy - everything I want in a cereal! 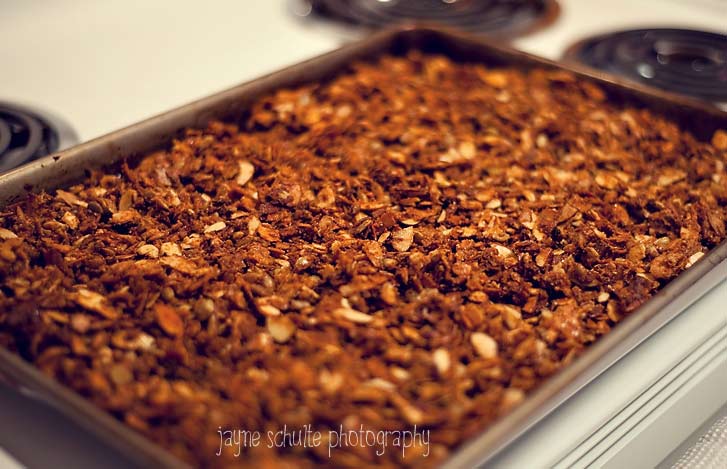