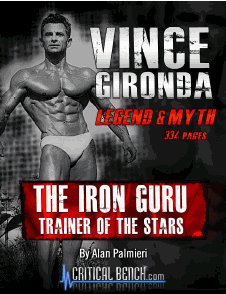 I get this question all the time, "What workout or exercises should I do to get rid of fat?"

Regarding the reduction of bodyfat, these problems are almost always diet, not workout, related. The "Iron Guru" Vince Gironda stated "body sculpting is 80% diet...if you don't have your diet down first, the rest is moot.

I was told a story of a nineteen-year old named Pete who was overweight and fat, his diet consisted of mainly pasta and other carbohydrates.

Pete’s goal was to become a Mr. America winner. Under Vince Gironda’s wing, Pete got ripped and won the Mr. California title. How did he do this? By taking Vince's advice, he gradually reduced his carbs and increased his protein intake.

The vast majority of nutrient consumption for the past 100,000 years or so has been in the form of saturated animal fat and protein, with fat
taking the larger percentage. The balance was made up of things that could be eaten in a raw state such as vegetables, berries, some fruits(in season) and nuts. That's basically it.

It has only been fairly recently that mans diet has shifted to a diet of high carbs - breads, pastas, candy bars, sodas, etc. And we grew fat and sicker and weaker after that change was made.

Arnold and many of the bodybuilders of the 60's were on the Vince Gironda's diet of steak, eggs, protein powder mixed with whole cream, etc.

It was a healthy moderate fat, high protein, low carb diet with plenty of green veggies.

A bodybuilder named Eddie Giuliani, who worked at World's Gym in the 1980's, used to laugh at the "carb freaks" who were trying to get lean on diets full of pasta. "I can't wait until bodybuilders go back to the steak and eggs diet.", he would say. At the time Eddie was in his fifties, but he still
had a ripped six-pack that would make everyone envious.

There should be no doubt that dietary fat does not make people fat. It is the combination of fat and carbohydrates (and excessive caloric consumption along with a sedentary lifestyle) that makes people fat.

Recently I decided to radically lower my carbohydrate intake. I replaced all carbs with green vegetables and limited my fruit to one serving per day. I got much leaner on a 65% fat diet than I ever was on 50% carbs. (I do try
to balance my saturated fats with omega 3 oils and try to consume more lean meats, but fat is still fat calorically speaking. Dietary fat also has
little to do with cholesterol and heart disease. If you want the truth, read The Cholesterol Myths by Uffe Ravnskov, MD, PhD.)

My calorie intake was higher, but my bodyfat has decreased and my energy levels were way up and I didn't have the "blood sugar lows'' I had while on a higer carb diet.

Give Vince's Diet a test drive First, gradually cut back on the amount of processed carbs you're
consuming. Pastas, breads, sugars, etc., are typically the biggest problems. Replace the calories from these with protein foods and
green vegetables.

Eating five to six small meals throughout the day will help. For example, if you're consuming 2,500 calories, divide that by five and have 500 at breakfast, morning/afternoon snack, lunch and
dinner.

Drink lots of water. If you're not drinking at least a gallon per day, you're setting yourself up for water retention. Your kidneys won't
have enough fluids to work with and you're going to have trouble losing bodyfat.

Join in and write your own page! It's easy to do. How? Simply click here to return to Submit Your Bodybuilding Article.