The End of Overeating: Taking Control of the Insatiable American Appetite By David Kessler

Sugar, fat and salt. These three things make food taste great. These are also the things that make you fat and unhealthy. I've never really had a problem putting down the chips and french fries. Fried and salty snacks never had that much pull over me. But sweets, ahh sweets like cookies, candy and ice cream are my big weakness. I have a sweet tooth, and when I eat them a little is never enough. If I open a box of cookies, there is no way I will only eat one, and rarely would I stop until I had eaten at least half the box.

According to the label on a pint of Ben & Jerry's ice cream there are 4 servings; I always thought a pint was a single serving. I've always thought that the reason that I cannot stop eating sweets is because I lack willpower.

Dr. David Kessler is a former head of the FDA who has struggled with weight problems. He uses this book to look into the reasons that people overeat. In the first section of the book Kessler goes into the science of overeating, and the problem that he calls conditioned hyper eating.

In nature animals' weight will achieve homeostasis, meaning that they will naturally maintain a healthy body weight. He looks at several studies that involving rats, and food.

In these studies when you feed rats a food pelt, they will naturally adjust their eating to maintain a healthy body weight. If you feed these same animals a sugar sweetened cereal instead, they will overeat and become obese. In addition to just overeating they will also work much harder to get the sweet food.

Rats will naturally stay in the corners of a room and will not venture very far in the open to get food pelts, but when you put sweet cereal in the center of the room they will go out in the open and get the food. Another study involved rats performing a nose poke to get a sweet treat. After each reward the rat would have to perform twice as many nose pokes (1 poke for the 1st treat, 2 pokes for the 2nd, 4 for the 3rd, etc.) to get another treat. The rat finally stopped after performing over 70 pokes to get a reward.

When Dr. Kessler asked the scientist that performed the study if they had ever seen similar behavior in other studies, he said rats would exhibit similar behavior when they were working for cocaine. Now I've never tried cocaine, so cannot compare the two, so I was floored to hear that sugary treats have the same draw as cocaine.

It turns out that food and drugs both stimulate the reward center in peoples brains. While Kessler looks at numerous scientific studies, he explains the information that keeps the book moving and interesting. He does not make the scientific information dull and boring.

They combine sugar, fat and salt to make their food irresistible. The food industry then also looks at how they market the food to people. The industry markets their restaurants as entertainment and their food as a reward. They are trying to convince you that you deserve to treat yourself to some "good" food. In the past, people use to eat at home and as portion of money spent on food was a low percentage of household income and this was an area where it was relatively easy to get people to spend more money. 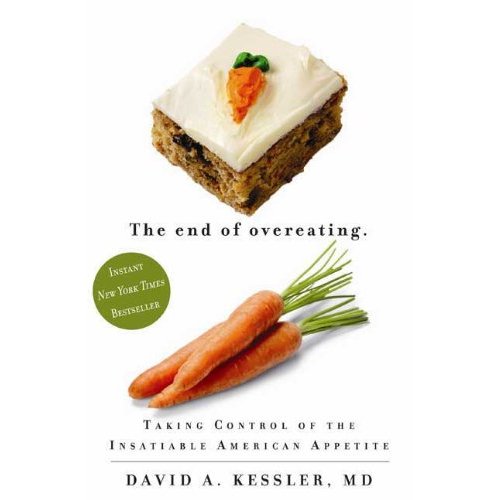 They also have greatly increased the variety of food and keep combining more things into the food. It is an industry joke that if you need to add something to a dish, you should add cheese and bacon. When you think about it, it is really amazing the number of dishes at casual dining restaurants have cheese and bacon on them. And when you add these items, you are adding fat on fat on salt.

The food industry also keeps combining more and more things into each dish, and when compared to other countries cuisine, they have simpler flavors without overwhelming flavors in one dish. The author points out that in the past, at the grocery store, ice cream used to come in 3 flavors; chocolate, vanilla and strawberry and when they combined all three flavors it was pretty impressive. Now there are literally hundreds of flavors of ice cream many of them with candy mixed in. In addition to all the things added into food, it is now much more processed than in the past.

Finally Kessler looks at some ways to combat hyper-eating. The tips he provides are more generalized and not real specific. This wasn't really written as weight loss book so it didn't bother me that his tips were general. One he suggests is when you think you deserve something unhealthy like dessert or fried food, also ask yourself if you deserve high blood pressure, diabetes or being obese.

I found this book very informative and also felt it was an easy read. They author goes into the right amount of detail with his facts so he gets his point across without boring the readers. I would definitely recommend this book to anyone who has struggled with eating healthy. Now if you are one of those people never have a problem walking away from food, then you might not find this book as interesting and might want to take a pass.