Ironmaster Preacher Curl Attachment review and pics by Kevin B.

I've owned the Ironmaster Preacher Curl Attachment for the Super Bench for perhaps two months now. It took me a while to be able to use it enough for me to be able to finally review it.

I bought it, perhaps, out of nostalgia. Years ago, at one of the clubs where I used to work out, I'd often finish a workout session doing preacher curls. The preacher curl equipment at that club was perhaps not the best, but it was pretty much ready to go - all I had to do was add (or subtract) weights from the curl bar and I could happily do a few sets. Use of that particular piece of equipment was never the main focus of my workout, but I do fondly remember finishing more than a few workouts with it.

The following photo is from Ironmaster's web site will help me explain the operation of their preacher curl attachment: 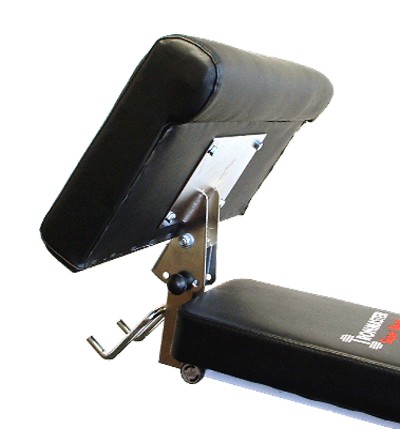 Note the pin in the photo. It is placed in the middle hole of three (holes). The hole into which you (rotate the pad so that the holes align) place the pin determines the angle between the pad and the bench. The bench angle may also be adjusted which further determines the angle (relative to vertical) of the preacher curl pad. It is my understanding that you want the pad to be angled at about 30 degrees from vertical or 60 degrees from horizontal.

When I got the bench, I played around with the various angles of both the attachment and the bench and determined that the configuration with which I was most comfortable is with the selector pin in the hole nearest the pad. The bench is then set at a 30 degree angle. Use of the hole nearest the pad on the preacher curl attachment causes the pad to be perpendicular with the bench. So, putting the bench at 30 degrees causes the pad to be 60 degrees from horizontal or 30 degrees from vertical.

Another photo from Ironmaster's site shows a model using the bench set at (I think) 20 degrees with the pin in the middle hole. I think that the guy in that photo is somewhat shorter than I am. As I played around with bench, attachment, and the various angles that I tried for both, I got the impression that lower bench angles would probably work better for shorter folks. (I'm only 5'10" though.)

Here's a photo of the bench from the side as I have it configured: 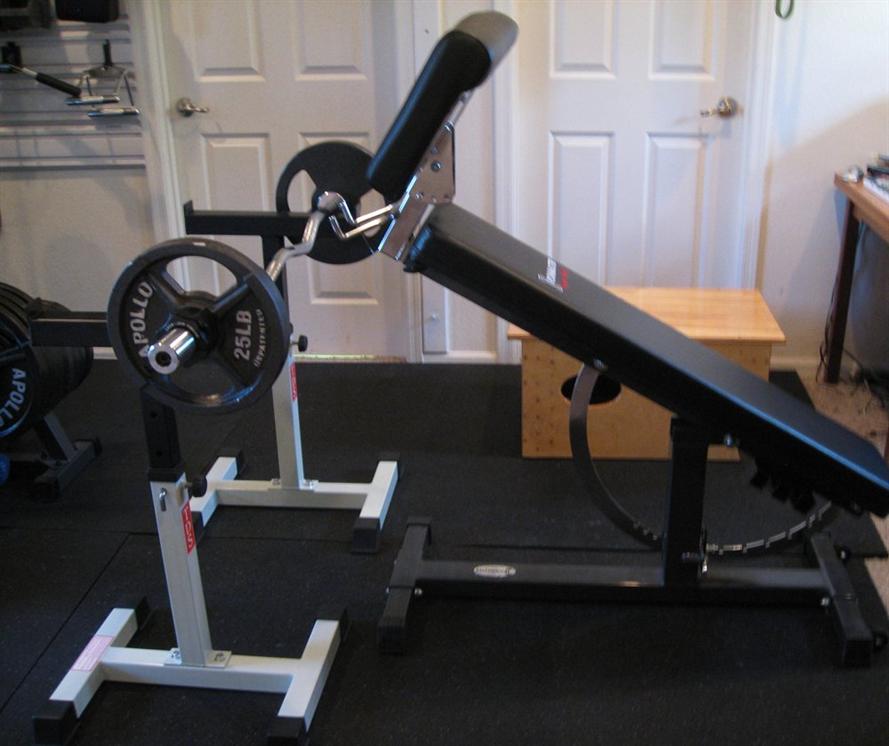 My major gripe with this attachment concerns those hooks on the front. For me, as I have the bench / attachment configured those bar support hooks are next to worthless. If I am curling the bar alone or the bar with some very light amount of weight, I am able to contort my arms so as to be able to pick the bar up and then reposition myself to do some curls. I am either unable or unwilling to do the contortions necessary when using heavier weights.

Another problem with the hooks is that they're too close together. The balance is precarious enough with an evenly loaded bar. It is not possible to place an empty bar on those hooks, add a plate to one side, and then let go. As soon as you let go of the plate that you just put on the bar, it'll teeter off and go crashing to the floor.

Thus I faced two practical problems with using this attachment. Firstly, I had no convenient way to load the bar with plates. I can, and did, place the bar on the floor, lift one end up, put on a plate, and then do the same to the other side. While this does work, at least for testing, I can't see this procedure as one that I'll want to use in the long term. I want some kind of stand or rack upon which I can place the bar and then load the plates without having to bend over all that much.

Secondly, once the plates were somehow loaded, and since the hooks aren't very useful to me, the preacher curl attachment didn't afford me any convenient way to grab the bar.

Next are two photos of me getting ready to grab the bar and then stretching down to grab it for starting the curl. Observe the hooks and note how far away they are from my hands in the first photo. It really is difficult (for me, anyway) to grab the bar off of those hooks. 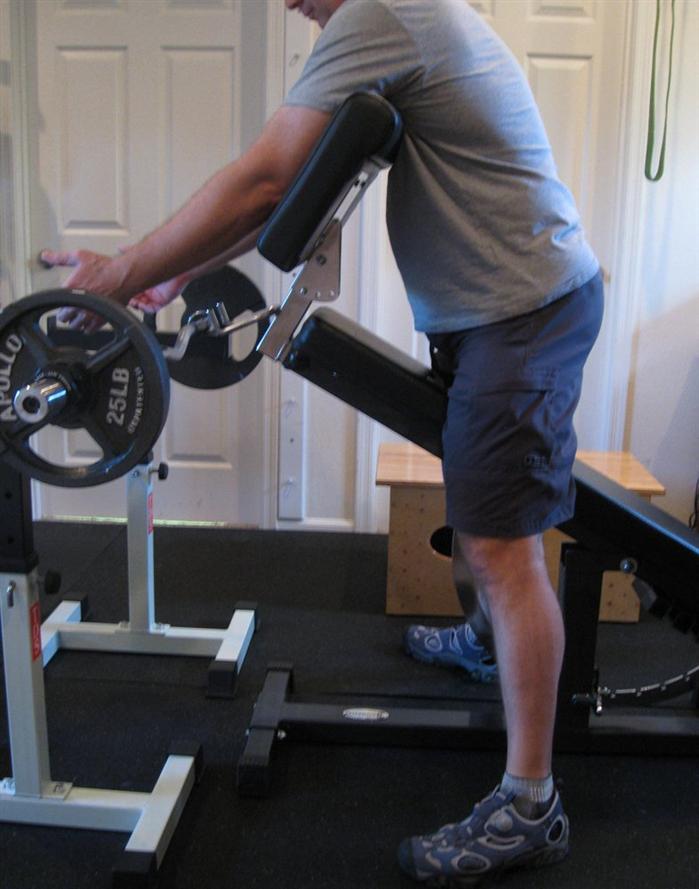 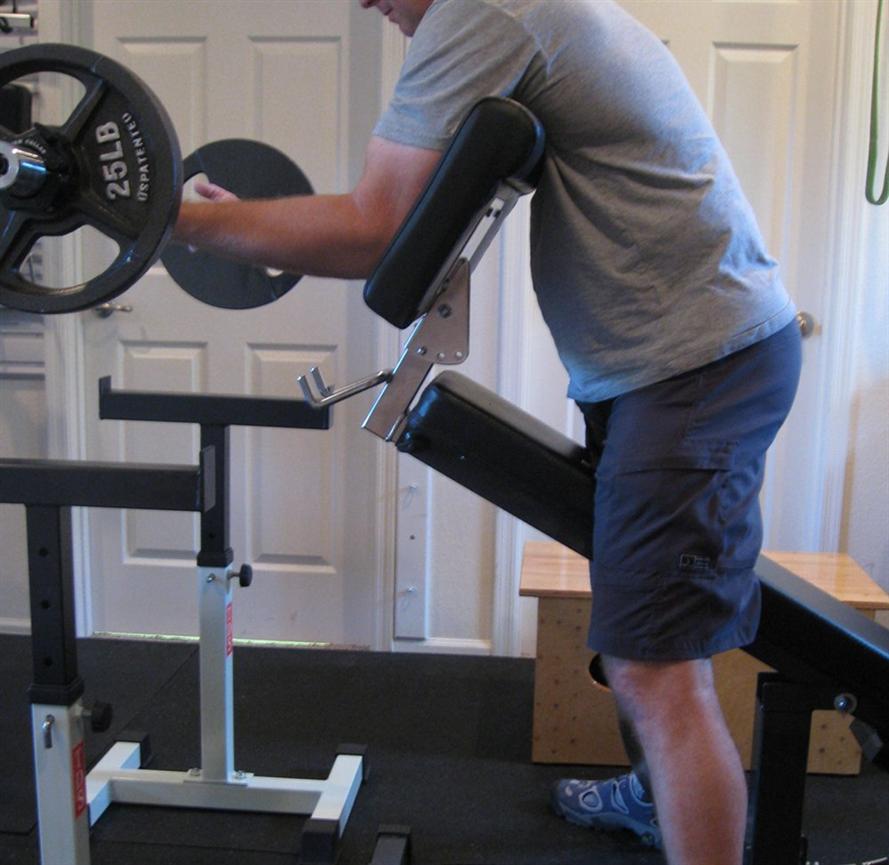 I learned about TDS Safety Stands from AttyGuy over in the BB.com forum. I ordered a pair - actually they come in pairs - and found that they solve both of my problems perfectly. I place them just low enough to stay out of my way when doing curls, but high enough so that I don't need to stretch overly much to reach them prior to starting the curls. The ergonomics ends up being pretty close to what I'm used to when using dedicated preacher curl equipment. 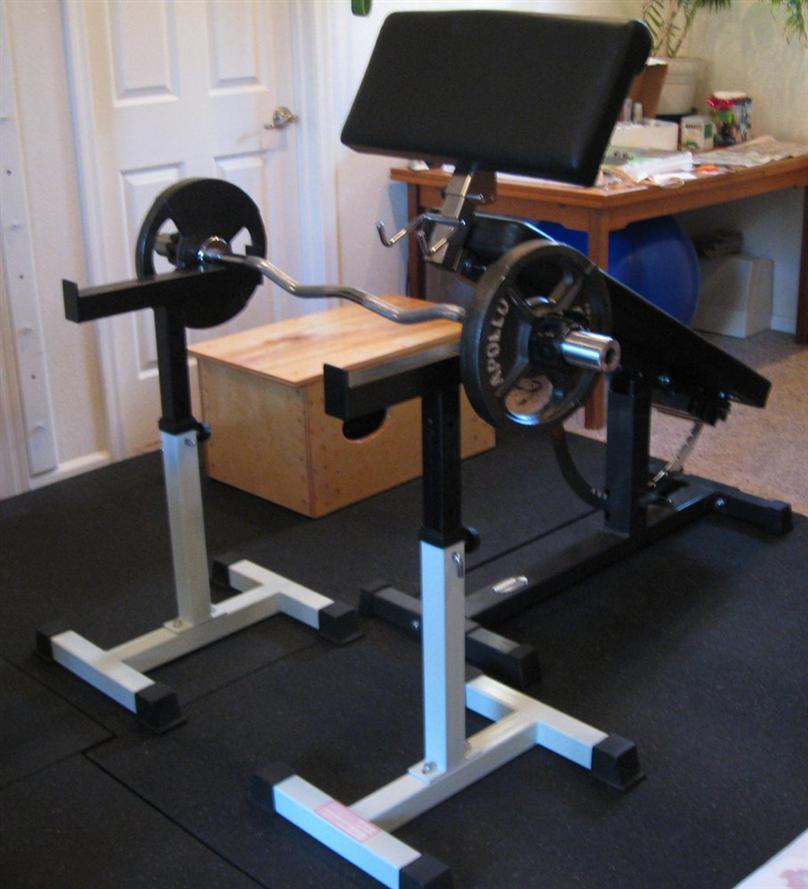 The Ironmaster Preacher Curl Attachment, in conjunction with the Super Bench, works reasonably well for doing preacher curls. You do, however, need some stands or rack for holding your curl bar since the hooks provided with the attachment are totally inadequate for that task.

Due to the fact that they are spaced so closely together, they cannot be safely used for loading plates onto the bar. I found too, that the hooks were difficult to use even when curling the bar alone. If you have shorter arms than I, you might have more success with the hooks than I did.

Another oddity is that you have to straddle the bench in order to do the curls. I found this to be a bit strange at first, but it doesn't bother me anymore.

Finally, it does take a bit of time to set everything up, not an inordinately long time mind you, but it is certainly less convenient than the dedicated piece of equipment that I once used (and still remember nostalgically) at the health club. As such, the Ironmaster Preacher Curl Attachment is not one that I have been using very often in my workouts. I expect that I will continue to use it from time to time, but I doubt it will be used frequently.

By way of contrast, it takes about the same amount of time to set up the cable tower attachment for use with the Super Bench. The difference, however, is that with that attachment, I am able to do a number of exercises (and exercises that I regard as more important), thus making it worth my while to set it up. The preacher curl attachment allows me to do only one exercise. (If someone knows of other exercises that may be done with it, let me know...)

So, in retrospect, if I had to do it over again, I probably would not purchase this piece.