Just thought I would post my highly biased review of the Ironmaster IM1500 after reading a review of the half rack on bb.com. It copped a bit of a hammering, which I thought was a bit harsh considering that the people making the comments don't actually own one. But everyone has a right to their opinion, so I thought I would address some concerns raised, and give you a bit of background on the product. 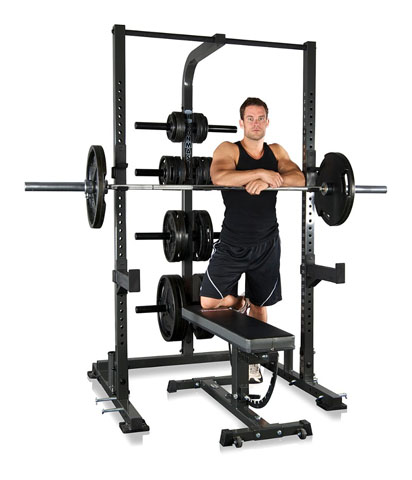 It is ironic that it got hammered on bb.com, because I actually came up with the design from reading comments on there. At the time Rogue racks and half racks were really popular but a common gripe was that you had to bolt them to the ground. So naturally I thought that a cross fit style half rack that didn't need bolting to the ground would be a good idea.

I am not sure if it is the same in the US, but over here in Australia home gym and studio areas are getting smaller and smaller as the price of real estate continues to rise. The Ironmaster IM2000 is very popular with people who are tight on space - it can fit where power rack systems can't - so I looked to that machine for some inspiration.

I guess where the bulk of the criticism came from on bb.com was the fact that they were comparing the IM1500 with racks or that were designed primarily for commercial use where space is not an issue. So factors like space effeciency and ease of use were not taking into consideration. But after years of selling gym equipment in Sydney I know how crucial space is and features like weight plate and barbell storage can be a massive bonus. Especially now with the growth in popularity of bumper plates which are hard to store on a lot of domestic weight plate racks.

One of the main criticisms was the length of the spotter arms. When we set up the half rack they were one of the features that impressed us most. At 35cm and weighing 4.2kgs you know they are bulletproof - after all they are designed for a load capacity of 1,000lbs. They are considerably larger than what is on the Powertec Half Rack, which is very popular with people who have limited space. Here is a comparison - To demonstrate, I set the spotters just above the low point in my squat. After I warm my shoulders up the bar would be a little lower on my back, so the barbell would touch a little further back on the spotters, but even taking this into consideration there is still loads of room left. There was also a comment made about the chin up bar - more or less implying that it was useless for chin ups because of the intersection of the centre support. This is despite the fact there is multiple pictures of someone performing a chin up. Sure the intersecting bar might be an issue for those that like to drive their chest into the bar. But for most people who just want to do normal chin ups (get their chin above bar), this set up is fine.

Well hopefully you have found this review helpful. Gym equipment is all about compromise - you always have to balance factors like footprint, functionality, durablity and cost. I think that Ironmaster has a proven track record of getting the balance right for their target market - customers who want quality gym gear that is space effecient at an affordable price.