I have been an off and on recreational weightlifter over the past 5 years, during which I've only utilized minimal (cheap) home equipment. However after discovering both the bodybuilding.com forums and CrossFit forums around the beginning of this year, I've since converted our garage into what I believe to be a pretty respectable home gym.

I've been in the market for a glute ham developer over the last 4 months and have since scoured the internet for information and reviews of the various models that are available. It should be noted that I have zero familiarity with GHD's and that my purchase would be my first experience with such a piece of equipment. With that being said, this is my review of the Christian's Fitness Factory Econo GHD (see all pictures below).

Disclaimer: I am in no way affiliated with CFF and simply hope this review will provide others with information that is seemingly limited on this particular GHD.

I placed my order on 10/8/10 and received the package on 10/19/10. The parts came shipped in a single box weighing roughly 90-100 pounds (I also ordered a pair of rings which were included in the same package). Inside the box, each part was individually wrapped in plastic and surrounded by shipping peanuts. 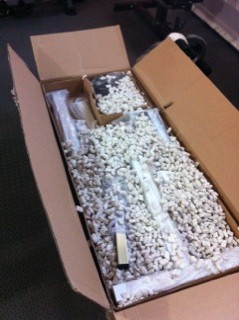 The box came with some damage, including a 2-3" gouge which resulted in two tears on one of the GHD pads. It's unclear whether this was the fault of CFF's packing method or the shipping company (the box came with several stickers which read "Fragile", "Do not drop", etc). Nonetheless, I contacted customer service and a replacement was sent out immediately (I'm currently awaiting the replacement).

In addition to the damaged pad, there were some minor scratches, paint chips, and what seemed to be a rusty residue on several of the frame pieces. The residue was mostly removed with some soapy water/towel. As far as the paint chips/scratches, I decided before placing my order that I was going to paint the GHD with some Rustoleum to better match my equipment-- so this was not much of a bother to me. Again, its unclear if this was the fault of the packaging or the shipping company.

With all of the parts laid out and a quick glance through the assembly manual, it seemed like putting the GHD together would take 30 minutes. However, the final assembly time was around 2 hours due to some adjustment, re-adjustments, and minor frustration. 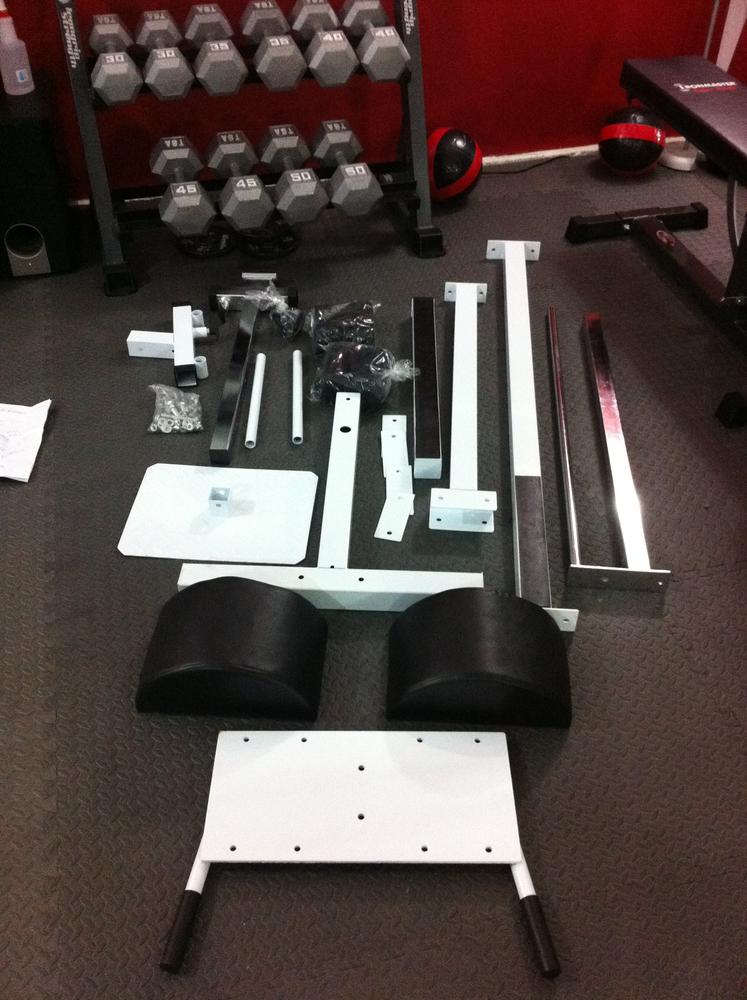 Having laid out all of the hardware, I quickly noticed that one of two bolts was missing, and instead replaced with a smaller version (The parts list calls for 7 "Part 10" hex bolts and 2 "Part 10 B" hex bolts. However we received 8 and 1 of each bolt, respectively). Nevertheless, I proceeded on with the assembly as the smaller bolt seemed to suffice.

The next bit of frustration came when installing the end caps of the roller pad. We found this to be very difficult, and had to lay a towel down and gently hammer them in. This resulted in one of the end caps breaking off which was a slight nuisance (I have since gorilla glued it back on with the hopes of it staying attached).

Assembly of the actual frame was simple and straight forward.

As I mentioned before, I had no prior experience with a GHD to compare performances, however found the performance of this GHD to be adequate (Sit-ups, Back extensions, glute ham raises). When properly adjusted for the correct position/exercise, the GHD performs as advertised. 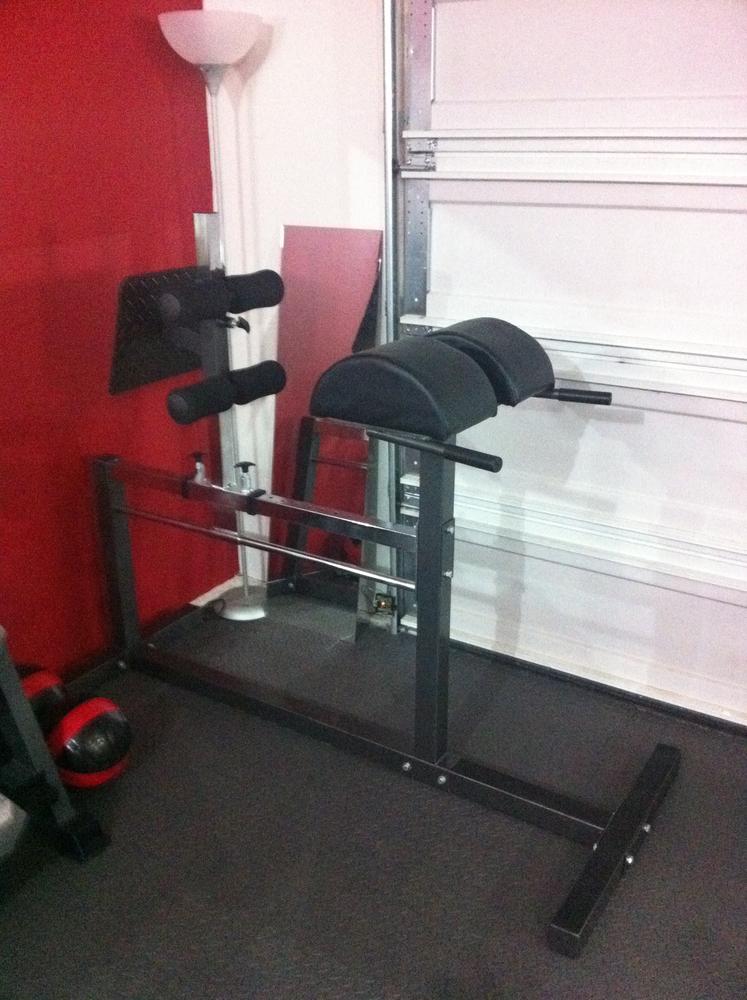 Stability was a major concern for me as the video of the GHD posted on CFF.com shows someone blasting out Sit-ups and back extensions with some stability issues at the back of the machine. However after conversing with Christian, he mentioned that when performed in a controlled manner, stability is not an issue. Having tested it myself, the machine shows no rise at the base of the machine. There is however some slight "play" side to side when getting onto the pads. However I have noticed this on videos of several other GHDs as well. Overall, I am satisfied with the GHD stability.

I've heard from a few people, including Christian of CFF, that when installing the upright slider piece, not to over tighten the back bolts, as adjusting the slider will become difficult. I was sure not to over tighten, however still find it very difficult to adjust the slider bar forward and back. It gets especially difficult the closer forward that I try to adjust it, to the point to where it takes one person to pull both pop pins, and another to push on the slider. I've since contacted Christian to see if there is any other advice as to how to make this adjustment easier, yet at this point, this is a frustrating aspect of the GHD. It should be noted however that once the slider is adjusted to the proper position, its stability is good (This part was recently modified to include a pop pin on both sides as opposed to just one. I believe this has been a great improvement). 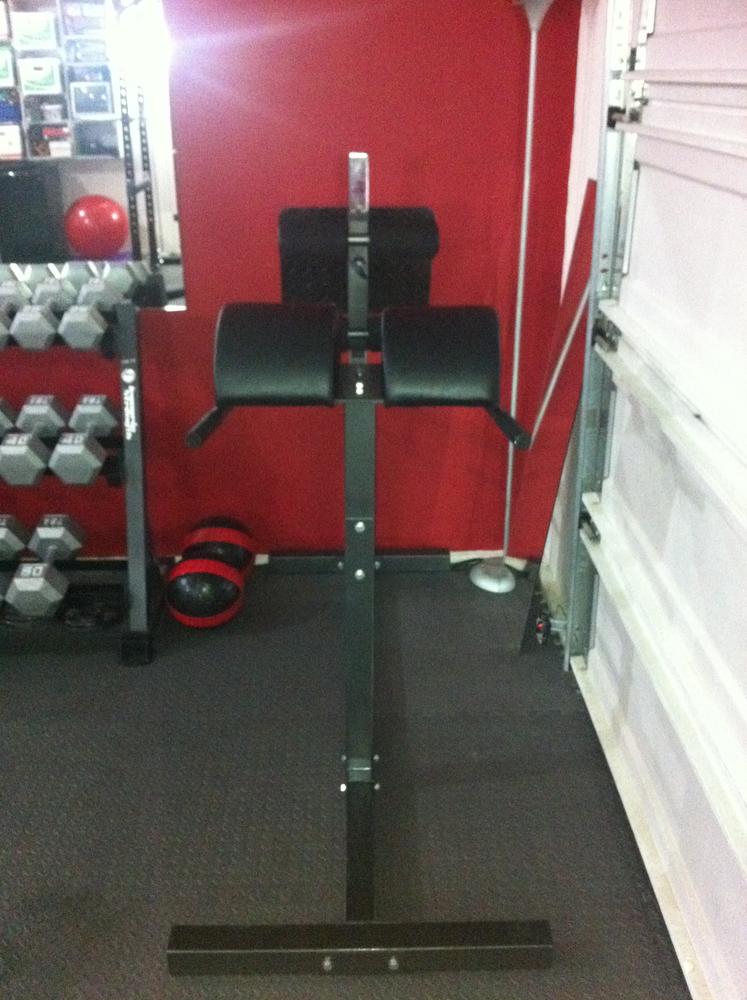 The foot plate/slider piece a mixed bag. The unit adjusts VERY easily (I wish the upright slider adjusted as this piece does), however the actual foot plate has some "play" as it is bolted on (Although I have noticed this play in several other similarly priced GHD videos as well). The size of the foot plate is adequate. As some may or may not know, based on the exercise you are doing (back extensions/sit-ups vs. glute ham raises) the entire unit should be taken all of the way off and reversed. This results in the correct angle to dig your toe into, or press your foot against. I find this to work well. 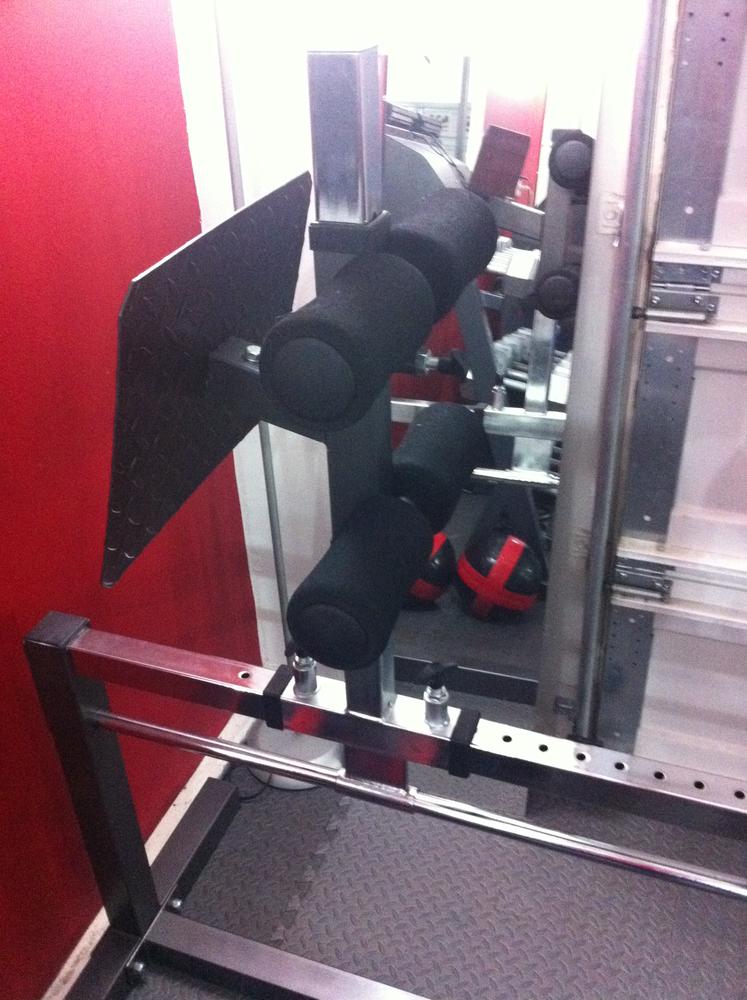 The roller pads are a bit thin, yet fine for the job. The biggest issue I do have with the rollers is the spacing. When placing my feet between the upper and lower rollers, the gap is quite large and gives a slight feeling that my feet may slip out while doing sit-ups. This also may just be due to the fact that I'm getting used to doing GHD sit-ups.

In the limited use that I've had with the GHD, the pads have held up well. I have not experienced any shifting of padding and find the comfort to be just fine. They are firm, yet provide good support. Only time will tell as to how durable they actually are, but for now, Im satisfied (As mentioned above, I'm still waiting on a replacement pad to replace the torn pad I received).

This GHD seems to be on the taller side of the GHDs on the market. Mix this with the fear of slipping out of the roller pads and you have a pretty hesitant user. With that being said, I am 5'7" and can just touch the ground when doing GHD sit-ups. I feel like a smaller person would have trouble reaching the ground.

Having never used a GHD, price was the number one determinant of my purchase. I found it difficult to justify a $500+ purchase on a machine I had not used and did not know how often I would utilize. With that said, my GHD options were narrowed down to the CFF, the Garage Gym Store GHD, and a few others. In the end I went the cheapest route (shipped to my door) at a final price of $280ish vs. the next closet of $430ish (Garage Gym).

I ultimately chose the CFF GHD based on price. However having experienced a few issues with the order, I came to realize why CFF has a great reputation for its Customer Service. I found both Christian and Noah (from Customer Service) to be very helpful with my questions and problems. I will definitely place additional orders through them should the need arise.

I've always been an advocate for the age old adage "You get what you pay for". And in this case, I think it once again holds true... However for my home gym needs, I also got what I needed. This GHD isn't advertised as a commercial unit and should be fine in any home setting. I fully understand that I could have spent an additional $200+ for a "better" GHD, but for my needs, I feel completely satisfied.

Save 15% on the Christians Fitness Factory Econo GHD