Article and pics by Keetman

Ok, I got them today......all 1700lbs of glorious new steel delivered 5' from my interior garage door! Keetman is happy!

But, it is not a perfect story, so I must do an honest YORK G-2 Olympic Dual Grip Plate review.

So, here it is. I took advantage of the offer from Allison Foreman, the York Rep who gave us the opportunity to get York stuff for 30% off or so. I have a lot of plates, about 1600 lbs or so set up around my gym so I don't have to constantly move them around.

Previously I had 3 different manufacturers of plates: Troy VTX Grips, Ivanko Wide Lip, and some CAP plates. I really liked the VTX plates, but just couldn't find a deal on them to suit my needs.....the rest were just plates and didn't do all that much for me. I really just wanted to have a whole gym full of the same thing, but it wasn't a pressing need so I was waiting on a good deal. Allison got back with me for a price of about .70/lb shipped to my door on some nice USA made grip plates so I pulled the trigger. Here is how it has gone so far.

I'll rate the plates on a five star scale based on looks, finish, usability, grip feature, and price. I'll add a couple of other review points, but I'm going to compare them to the Troy VTX Plates because I really like them and since I didn't get them new I can't judge them on Customer Service, packaging, or shipping.

On the above levels I rate the Troy VTX Olympic Grip Plates 3.7 Stars. 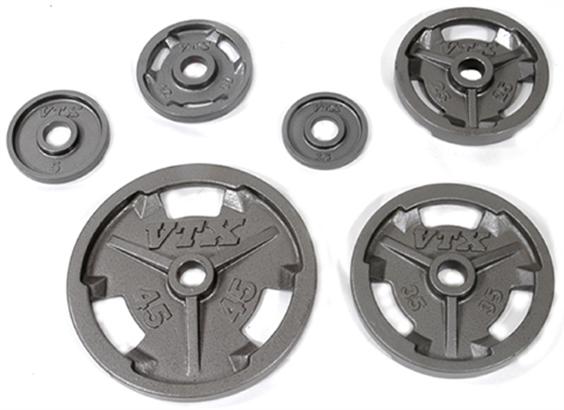 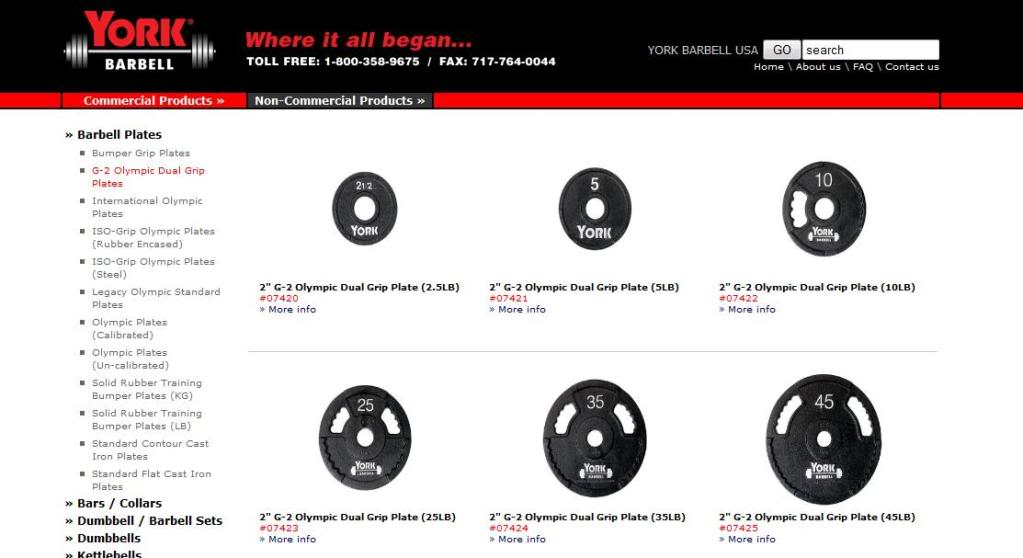 My experience with York was exclusively through Alison. I emailed her on October 24th with a request for quotes on about 1500 lbs of plates. She got back with me on the 27th with 3 separate quotes with shipping and instructions to inform her if I needed a different plate as they had plenty of options.

I placed my order on the 29th, got a call from the freight company on the 2nd, and they arrived today at 11am. Allison answered my phone calls herself and was responsive to all emails. She was responsive, pleasant, helpful, and honest.

This was not my most pleasant part of the experience. The price was very competitive...$75 for about 2000 lbs. But, I had to pay $15 extra to get a delivery appointment with the freight company. They were fast and called me Monday. I specifically told them I couldn't receive the weights before noon today, so they specifically told me they'd deliver between 1pm and 3pm. Today in the middle of my training at 11am, which I do with my neighbor.....so its his time too, I got a call from Joe-Bob the delivery man stating he was two doors down and couldn't find my place. I asked him what time it was and he said "Yea, its just after 11, we were supposed to be here between 1 and 3, but yea....we're here now so where do you want these?". After about 5 minutes of talking with this goof I finally got him turned around in the right direction.

Upon opening the door to the truck I see a smashed up pallet with my weights just sitting there freely. Several are fallen on top of each other and the whole thing looks very precarious. He's got a pallet jack, but because the pallet is so banged up we have to help him get the thing to the back of the truck. At the point where he's got to put the jack and pallet on the lift gate, I actually have to turn and look away because I'm certain he's going to drop the entire load on my new concrete driveway.....tearing it, my weights, and probably him up. Somehow he manages not to do this, I'm not sure how as I really couldn't look. He takes them to my door and after I ask him, he makes no apologies about screwing up the delivery time and just says he was fast today.

Almost none! Most of the plates were freely sitting on the pallet, many were knocked over, several were scratched and banged up, and the pallet was destroyed.

2.5 STARS (1/2 star extra because I'm guessing most manufacturers would ship the weights freely stacked in some manner). 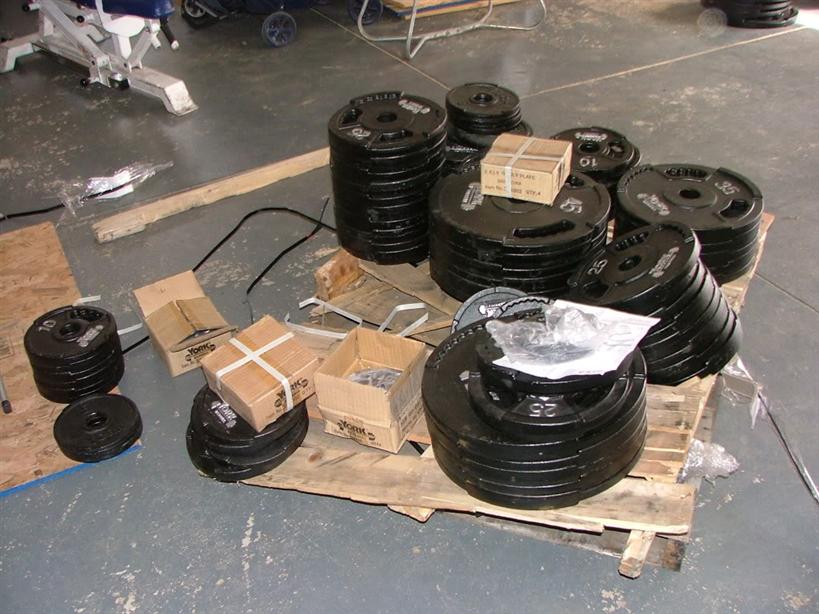 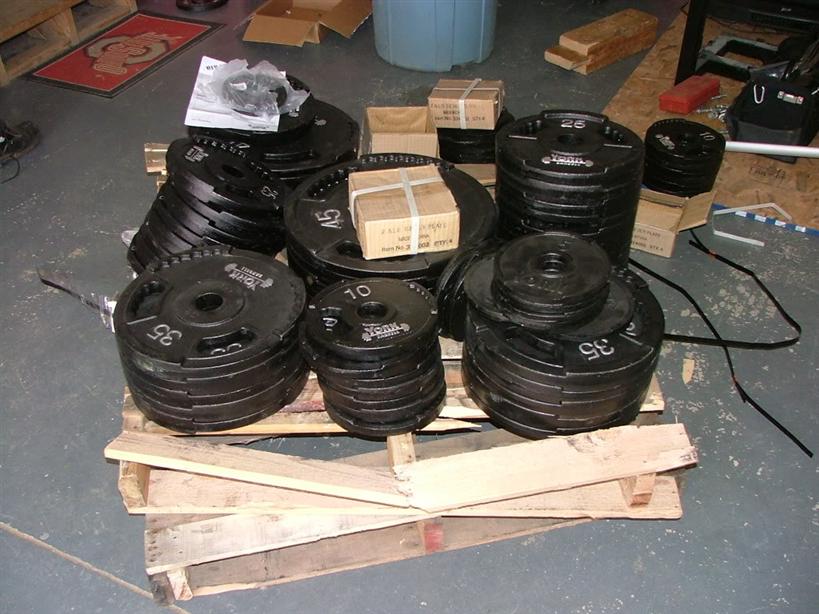 Not too much not to like here. They're black with a gritty finish and they have nice grip handles at 10/2. I like the big York emblem with contrasting white lettering and the opposing finger holds even where no grip is present give the plates a nice look. The interlock valleys/hills are also noticeable and they're definitely different from other plates just at first glance.

I gave the Troy VTX Olympic Grip Plates 4.5 STARS because they are obviously cool plates. 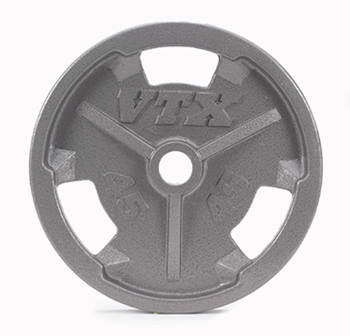 I give the York G-2's 4 STARS. The look is cool and distinct, but not quite as sexy as the VTX's. I'm probably being generous in all areas here because my idea of a "5" would be the revolver style plates and they're not really in the same category of either of these. 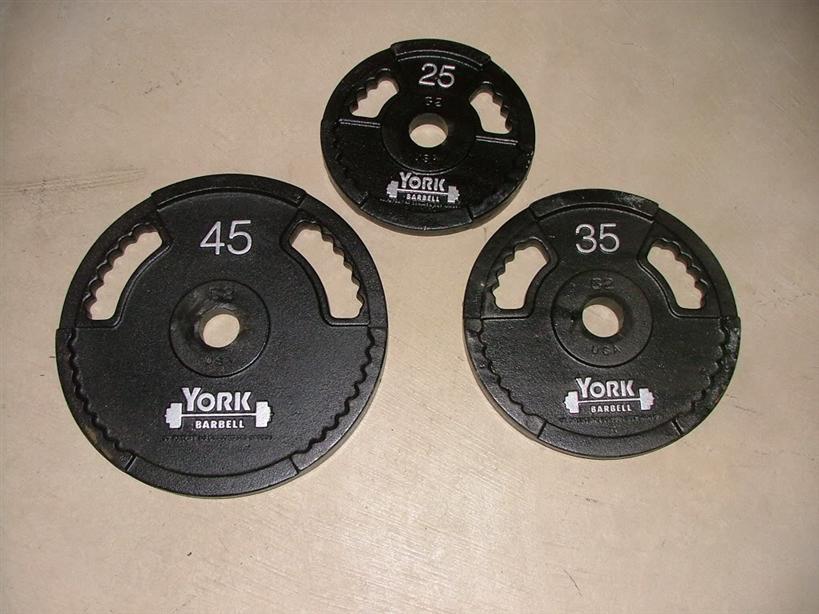 Not so good here in all honesty. The gritty look is good, but the paint is about the level of cheap CAP plates, in fact that's what they remind me of. Even before any use, there are many places that are scuffed up to the bare metal and I even saw a tiny bit of rust already starting on one of the plates. To make matters worse, about 70% of the plates lettering paint were terrible and sloppy. In the long run I will work to keep the rust off these plates with WD40 and my guess is these will age "old school" use style with time. But for now, they do leave something to be desired.

I gave the VTX's 4 stars because they use some sort of baked on enamel and even after almost 2 years of use they show very little wear.

I give the York G-2's 2.5 STARS because I like the gritty texture, but hate the overall paint finish and sloppiness. I was a bit disappointed here.....I've actually seen CAP plates that looked better in this category. 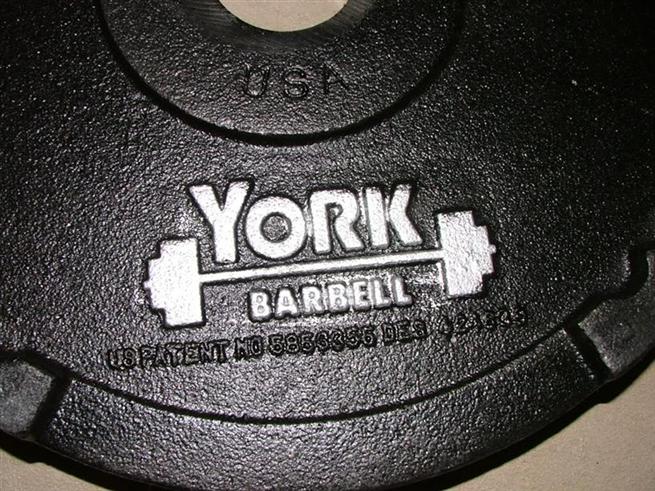 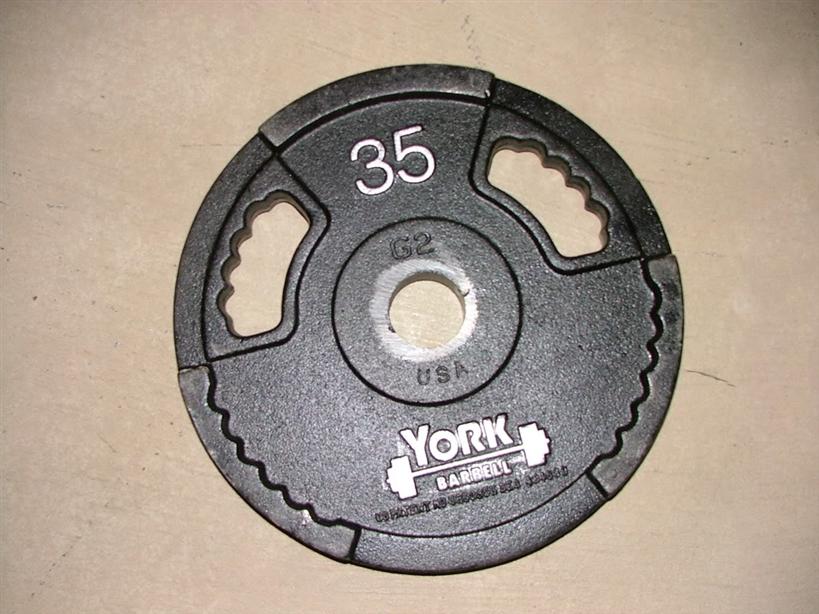 Ok, they're plates so I'm not going to be too critical here. The grips are nice and not much different in function than the VTX's. The plates are made at a comfortable weight for most practical uses.....just kidding. Seriously, I don't see many issues here. The interlocks are nice here because the plates seat very well together. I did measure them though and there was only a slight difference in total width....maybe 1/8" per 2 45lb plates.

I gave the VTX's 4 STARS. I'm going to give the G-2's 3.5 STARS. I'm taking off a quarter star because they are missing a grip and because when they are lying flat on the floor the gap on the grip isn't tall enough to get my fingers in.

Almost no difference here. The VTX's have three, the G-2's have......2. The grips on the G-2's are nice because they have individual finger recesses and the actually have grips on the 10's! I really don't understand why these manufacturers can't put the grips at 9/3 though....seems like this would make far more sense.

Ok, the price was about .71/lb shipped right to my front door. I can't get that price at Wal-Mart for CAP grip plates. That's just about as good as you get for brand new plates shipped to your door. Unless I find them for .2/lb next week, I foresee no regrets here.

Don't get me started on the price of the VTX's. If I could've found a deal on them......I wouldn't be doing this review right now.

I give the VTX's 2.5 stars and that's probably being generous as the best I've come up with is 1.5/lb and some mysterious sites that state about a dollar a pound before shipping.

Overall rating for the five comparables on the York G-2 plates: 3.55 STARS

I have given up some finish quality and I'm sure I will eventually have some scuffed up plates. But, these plates came at a really good price, have comparable grips, do not look bad, and are very functional. The verdict is still out on the finish, but I'm hoping that over time, with a little bit of care, these will simply look like iron that has been put to good use.

For the price I would buy these over the VTX's. If I could find a price point on the Troy's that was closer.....I go that route. But I truly don't expect any regrets going into the future.